Last night I had a sneak peek at the famous auction house, Christie's. A business acquaintance of my husband's invited the two of us to a holiday gathering amid the backdrop of the Magnificent Jewels collection that is going to be auctioned next week.  How could we say no? 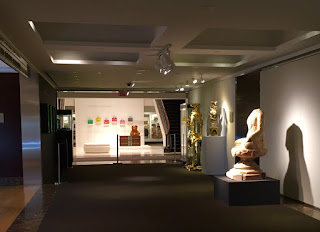 As we turned the corner into Christie's we stepped into an elegant fantasy gallery, featuring an ancient Buddha sculpture, an ornate standing clock, and Hermes purses at the far end of the hallway.  One more turn to get to the party and we saw this, a cased filled with jewels to be auctioned. 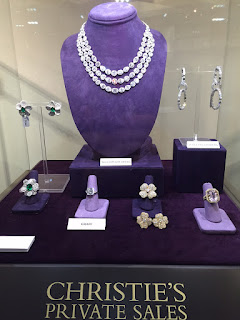 The jewels -- more than 500 lots of them -- came in all sizes, shapes and colors and in a remarkable array of settings and arrangements.  We saw earrings, necklaces, brooches, bracelets, chokers, pins, even bejeweled purses.  There was incredible variety and artistry, all displayed throughout four or five rooms, in clear cases with strategic lighting to make everything sparkle (though hard to photograph). 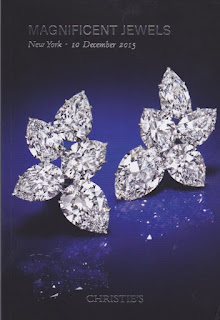 The catalog shared stories of a few of the previous owners and some were interesting snippets of history, with train magnates and generous philanthropists.  Some previous owners didn't care to be acknowledged.  I imagined all sorts of tales surrounding the jewels identified as "Property of a Gentleman".

I couldn't leave without looking at the fabulous display of Hermes bags we'd spied as we entered Christie's. 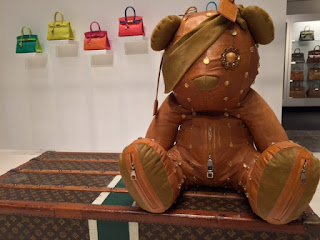 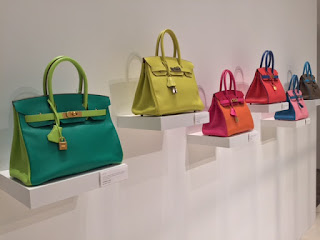 Swoon!  These are all in pristine condition and there are shelves and shelves filled with handbags just beyond the wall. You can see a glimpse of them in the first picture.  I love handbags and would happily carry one of these colorful creations, but they're a bit out of my price range.  They expect to sell the 2011 limited edition citron colored Hermes bag below for $8,000-$10,000. 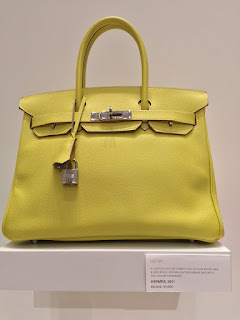 We were just about to leave when we spied an alcove featuring ancient jewelry.  It was rather like stepping into an annex of the Metropolitan Museum of Art.  Here were items that were truly historical in nature. 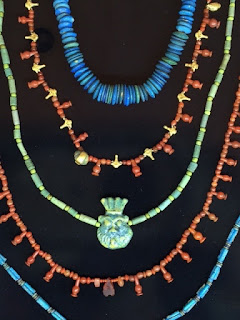 The top red necklace in this picture, for example, was Egyptian and identified as from the New Kingdom, 19th-20th Dynasty, 1295-1069 BC.  It is "composed of small spherical beads, interspersed with poppy seed pendants and a central faience bead with a sheet gold band."  Remarkable.  Each of these necklaces was from ancient Egypt; it's unfathomable to me how the artisans long ago crafted such fine objects.

Perhaps my favorite of the ancient pieces were these bracelets, items I would wear today and assuredly get compliments on.  I think they are timeless in their appeal though crafted millennia ago. 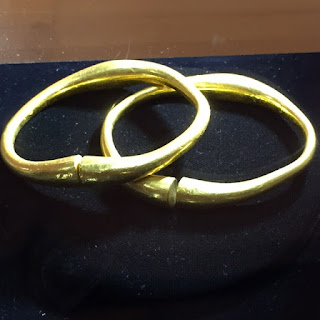 Each of these was listed as an Achaemenid gold bracelet from circa 5th century B.C. Here are the lot notes:

The Greek historian Xenophon (430-354 B.C.) wrote that bracelets were among the gifts highly esteemed amongst the Persians (Anabasis 1.2.27)  Glazed brick panels from the Achaemenid city of Susa depict archers wearing bracelets, and reliefs at the capital city of Persepolis depict bracelets being given as tribute to the King.  The particular shape seen here is a common type of Achaemenid jewelry, often with the addition of animals as head terminal (see pp. 132-133 in J. Curtis and N.Tallis, eds., Forgotten Empire: The World of Ancient Persia).

Fascinating and wonderful, isn't it?

In fact, the whole evening was fun and fascinating.  Someday, I hope to observe an auction to find out who takes home these pieces of history and beauty.  For now, the memory of the night will sustain me.

Norma Schlager said…
What a treat! I sure would love to be a fly on the wall at the auction.

Michele Bilyeu said…
Oh my! What an awesome experience. I loved just seeing all of this through your eyes! Such an opportunity, indeed!
December 6, 2015 at 11:47 AM