A Walk with a View 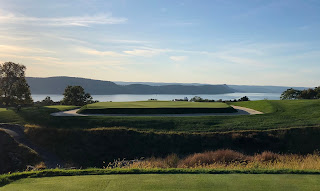 It's definitely worth the walk.  The view is so spectacular in part because the palisades are undeveloped.  In 1898, John D. Rockefeller purchased the property across the Hudson to put an end to "the blasting noise, dust, and ghastly scars to the majestic highlands of the Hook", caused by the mining operations that aggressively quarried the rock.

This launched an initiative to purchase as many tracts of land as possible to preserve the bluffs in perpetuity, an effort that included Rockefeller and other wealthy residents.  Today, the bluffs along the Hudson are part of various New York and New Jersey state parks.

Thank heavens for that vision more than a century ago.