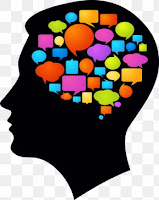 How much time can you spend vacillating between different ways to choose your next book?

It seems you can mull it over for days when you're self-isolating.  Or, at least, I can.

I'm one of the lucky ones.  My decision-making isn't that complex right now.  I have the luxury of not trying to juggle home schooling with work demands.  I have time on my hands.  I can stand in front of my refrigerator and wonder, What's still fresh enough that might work for a meal so I don't have to make a grocery run quite yet?  I can wander around my house and think, What household project should I do next?  I can look out the window critically and say, Did I pull all the weeds from the vegetable garden?  And, apparently, I can toss and turn at night, grappling with, How should I select what to read next?

No doubt you're bored reading this.  I got bored thinking about it.  It was like listening to a teenager whine in my head.  Totally annoying.  Enough already!

And so I just started.  I picked the first book in my alphabetical list that I thought would be suitable for nighttime reading.  I'm reading Age of Innocence.  It's perfect.  This book is making me think of things that have nothing to do with our current situation.  Having never read the book before (I know, egad!) I'm feeling that the descriptive language matches the tone of a book filled with flounces, waistcoats, and silk.  May I read to you for a moment from a passage I think illustrates this point so very well?


The immense accretion of flesh which had descended on her in middle life like a flood of lava on a doomed city had changed her from a plump active little woman with a neatly-turned foot and ankle into something as vast and august as a natural phenomenon.  She had accepted this submergence as philosophically as all her other trials, and now, in extreme old age, was rewarded by presenting to her mirror an almost unwrinkled expanse of firm pink and white flesh, in the center of which the traces of a small face survived as if awaiting excavation.  A flight of smooth double chins led down to the dizzy depths of a still-snowy bosom veiled in snowy muslins that were held in place by a miniature portrait of the late Mr. Mingott; and around and below, wave after wave of black silk surged away over the edges of a capacious armchair, with two tiny white hands poised like gulls on the surface of the billows.