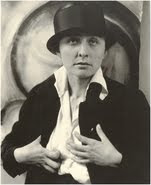 It is only selection, by elimination, by emphasis, that we get at the meaning of things. - Georgia O'Keeffe

Today, I went to the Georgia O'Keeffe: Abstractions exhibit at the Whitney Museum in New York City. I'm fascinated by many of O'Keeffe's depictions of the American Southwest, but I was relatively unfamiliar with her abstract paintings. So off I went to see what I could see.

The first thing I encountered was the long line to get into the museum. Yes, the curator I chatted with as I waited was most pleased to see the line -- business was good! Alas, I was sad about that as I traveled through the exhibit; I wanted the rooms all to myself so I could linger and ponder each painting more easily.

The exhibit was arranged more or less chronologically, beginning with some charcoal drawings from the start of O'Keeffe's career (1916). Some of these contained simple lines, growing slightly broader as they moved across the page to give them motion. Others were curves and spirals, delicately shaded for dimension. Later in life, O'Keeffe admitted in an interview to Perry Miller Adato that there were a few shapes her mind kept creating and that she unwittingly kept repeating in her artwork. It's clear that the circle, curve and swirl were some of those shapes because they were already present at this early stage in her career.

O'Keeffe added blue to her art after reading The New Science of Color (published 1915) which stressed that artists should introduce color to their palette one at a time, but only after mastering charcoal. But my impression from the show was that this limited palette phase didn't last very long. As early as 1917, O'Keeffe was using every water color in her box, painting portraits (which she called "songs") and creating series with very bold primary colors.

By 1918, O'Keeffe was using oils in her work. She was attracted to "...the idea that music could be translated into something for the eye". Hence, her Music series was born. These paintings were created to give form to O'Keeffe's feelings and thoughts in a similar way that music can give expression to emotion without words. Many of the paintings during this period of her life have the undulating lines we're more familiar with from her later paintings of flowers. These were in stark contrast to the linear, more "fractured and flattened forms of European Cubism". (I can't take credit for that good explanation of cubism; I copied it from the note on the wall.) In this way, O'Keeffe was more of an avant-garde artist than I realized. She was doing something completely new. 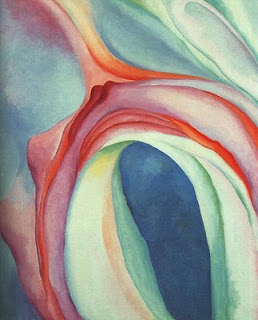 Music Pink and Blue No. 1 (1918)
Her 1923 exhibit was not well received because people were negatively influenced by previous photographs of O'Keeffe -- many of them nude -- taken by Alfred Stieglitz, her lover at the time. (They married in 1924.) The public felt O'Keeffe had too great a comfort with her sexuality. One critic stated that the curves and colors in her artwork were an expression of the "...body's subconscious knowledge of itself" and that it was distasteful. O'Keeffe argued that critics were reading too much into her art, but to no avail.

The experience, however, led O'Keeffe in a slightly new direction in her art. She began to abstract forms found in nature. Some of my favorite pieces in the exhibit were from this time period. I especially liked the beautiful series of paintings of Lake George where she frequently vacationed at Stieglitz's family getaway. The paintings are made with great attention to color -- all very earthy, saturated and gorgeously blended. But interestingly enough to me, they also represented two of the primary ways in which O'Keeffe represented line: undulating and in sharp points at the end of curves. (Please note this is MY take on the paintings.) 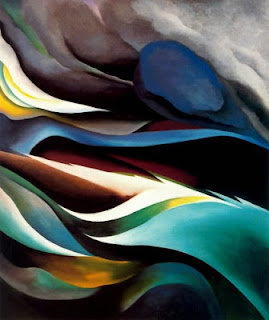 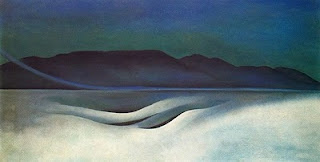 Because she had assisted Stieglitz with the development of his photos of her, O'Keeffe had also learned how photographers cropped photos to achieve more powerful compositions. She now began to employ that same technique in her art. Sometimes, as in the 1930 Jack in the Pulpit series, O'Keeffe would start with a realistic representation of her subject and slowly begin to strip away some of its elements to get to that portion of the subject which interested her most. While living in New Mexico, O'Keeffe would also use this technique in her bone series. Here, she uses the pelvic bone of an animal as a frame for the sky. I confess that I really like this series as well. It's graphic and so focused, and yet there's still great detail and delicacy in the depiction of the curve of the bone and depth in the color of the sky. 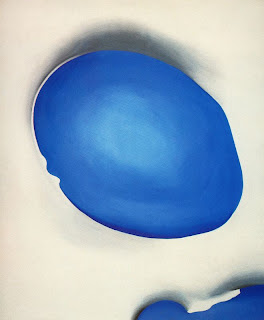 As she aged, O'Keeffe made a shift in her art again, creating more linear representations and using architecture as her inspiration. This reinvigorated her art. Black Door with Red (1954) was a huge canvas in the exhibit. In its composition the piece is much simpler, but it still carries a pretty good punch. The colors are bold and shapes have crisp lines save for a few, where the edges of some rectangles are blurred with the background. I like those blurred edges....

All in all, it was a good day and I'm so happy to have seen the show. I saw artwork that I hadn't encountered before from an artist whom I admire. I saw O'Keeffe from a completely new perspective and I think that's exciting. I'm curious to try out this close cropping technique she used to such great effect to strengthen composition. I wish that the flow of the exhibit had been easier to follow; sometimes I inadvertently skipped a few years by starting out on the wrong side of the room (it wasn't clearly marked or consistent). The tiny numbers on the walls that corresponded to the audio guide weren't always easy to find or visible through the crowd, making the audio guide harder to use than it should have been. But, I will say that I learned a great deal from the guide -- in fact, most of what's written above is a paraphrase from the notes I took while listening. I also really enjoyed listening to excerpts from interviews with the artist herself. It was fascinating, for example, to listen to O'Keeffe describe her first impressions of New Mexico in 1929 by saying "...that was mine .... that was my country ... it fitted to me exactly."

I strongly urge you to see this retrospective if you can, but you'll have to hurry; it's only open through January 17th.
Labels: exhibition review Georgia O'Keefe Whitney Museum of Art

Natalya Khorover Aikens said…
I felt like I was there with you! ( as I should have been..grumble...) thank you for that wonderful review, it is highly unlikely that I'll get there before Sunday (grumble again..) I also find it interesting that your B&W pix from your previous post have the same curves as Georgia's paintings. Maybe you were channeling her unknowingly?
January 15, 2010 at 9:14 AM

Linda Cline said…
Thanks for giving us a wonderful report on a great artist. I found a gallery of images from the exhibit. http://www.whitney.org/Exhibitions/GeorgiaOKeeffe/Images
Black Door with Red is on the third page.
January 15, 2010 at 10:40 AM

JYA Fiberarts said…
Thank you so much for sharing this wonderful exhibit. I had not seen these works and I truly admire the work of Georgia O'Keefe for the boldness of her images. Again, thank you for posting this visit to the museum.
January 15, 2010 at 1:26 PM

Norma Schlager said…
I won't get there either, Vivien, so thank you for a wonderful docent tour of the exhibit.
January 15, 2010 at 5:51 PM

Cindy Green said…
Great review of the exhibit! I think most of us are familiar with much of her work, but not the abstractions as much, so we learned a lot thru you! Thanks!
January 16, 2010 at 11:38 AM

Vivian said…
I've always been fascinated with that first little watercolour with the circular patten!
January 18, 2010 at 12:34 AM

Sherri Woodard Coffey said…
Thank you for this post. It was nice to see the exhibit vicariously. Wish I could see it in person, but ... Loved your paraphrasing of your notes.
January 18, 2010 at 7:57 AM

kanishk said…
this post has been a wonderful peek at the exhibit! Really nicely done.