Renoir in the 20th Century

There's an exhibit currently being shown at the Grand Palais in Paris that focuses on the works Pierre-Auguste Renoir created in the last 30+ years of his life. Think that the works on display will be impressionist paintings? If you do, you'd be wrong. No, the works collected for this exhibit show Renoir's attempt to approach more traditional subjects with a "sense of liberty", as per Sylvie Patry, the curator of the exhibit.

Indeed, after Renoir's trip to Italy in late 1881 to view works by Renaissance masters, the artist would later state that he came home feeling, "I had gone as far as I could with Impressionism and realized I could neither paint nor draw." For the rest of his life, Renoir would work hard on paintings that harkened back to those he saw in Italy, full of mythology and female nudes. He focused more on technique at this stage in his career than precise reflection of his subjects. By doing so, he influenced artists who came later, including Pablo Picasso, Henri Matisse, and Pierre Bonnard. Patry says, "It was just this free interpretation of a traditional subject, this sense of liberty, that captivated Picasso." In fact, Patry believes that Renoir's painting, Eurydice was a source of inspiration for Picasso's Seated Bather Drying Her Feet (1921). (Eurydice was one of seven Renoir paintings which Picasso owned.) 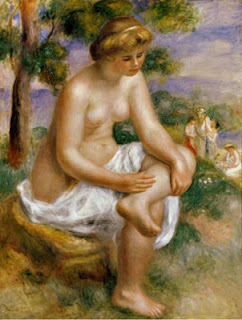 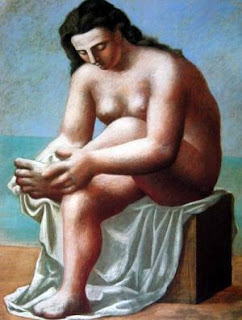 This period of creativity met with skepticism and disappointment from the critics, but now Paltry is hoping to show that Renoir's work was invaluable to the development of the modern works which followed. This exhibit is coming to the Los Angeles County Museum of Art on February 14th and to the Philadelphia Museum of Art on June 17th. It includes about 70 of Renoir's paintings, drawings and sculptures, along with modern artist works influenced by Renoir. I'd like to know more. Road trip, anyone?

(To learn more, read the article by Richard Covington in the February, 2010 Smithsonian issue; it's the source for most of what I wrote in this post.)
Labels: Philadelphia Museum of Art Picasso Renoir Smithsonian magazine

Susan Schrott, Artist said…
Thanks for posting this VIvien. I would never have know how specifically Renoir influenced the artists who came after him. Beautifully written.
January 24, 2010 at 8:16 PM

kanishk said…
Congrats! You are really on a roll!