We've lived in our house for 25 years.  We live in a neighborhood -- not in the middle of nowhere -- on a street that's a mishmash of architectural choices, rather like a time capsule of taste over the decades. We occasionally glimpse foxes.  We can sometimes hear the coyotes chatter at night.  Deer and turkey nibble in our yard all-the-time. We're in the flight path of migrating hummingbirds and hawks.   And owls hoot throughout the year, particularly in the winter mating season.

But it wasn't until yesterday that I actually SAW one of the beauties.  My husband a big bird  in one of our trees first thing in the morning.  Lucky for us, the owl flew about 100 yards and settled into another of our big trees.  Despite its size and having lots of white feathers, I couldn't find the owl when I looked out the window.  I had to go outside to try to get a glimpse. When I finally found it, I could have watched all day.

I soon realized it was a barred owl and that it was looking right at me, following my every move.  I didn't want to frighten it, so I quickly snapped a few pictures and went back inside.  It seemed to be enjoying the warmth of the sun on an otherwise rather cold day.

Two and a half hours later and the owl was snoozing.   I crept a little closer this time -- I figured it didn't feel threatened if it was taking a nap -- and took a few more pictures.  With the sun behind the clouds, the owl blended in well with the branches. 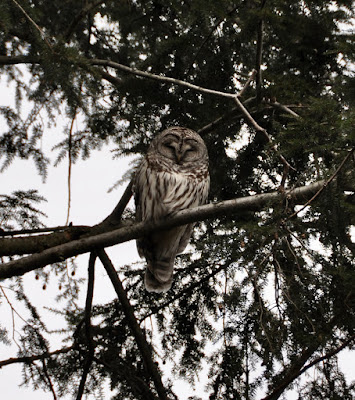 Isn't it gorgeous?  I don't know how long it stayed in our tree; it was gone when we checked in the early evening.

I feel so lucky to have had this encounter.  Maybe others won't understand, but I'm glad that, even for a bit, a creature felt that my yard was a safe haven.   That nothing we did, alarmed or frightened the creature.  That it could rest.

It sounds schmaltzy, I know, but it really was amazing.