My father has collected US postal stamps for as long as I can remember.  He'd sometimes pull me aside to tell me the story behind a particular stamp.  Why it was printed.  What moment in history it was commemorating.

Now that my parents are older, they're purging.  How do you purge a stamp collection?  For my parents it means putting loads of old stamps on any envelope that's destined to be mailed.  I've received a few in the last few months.  Take a look: 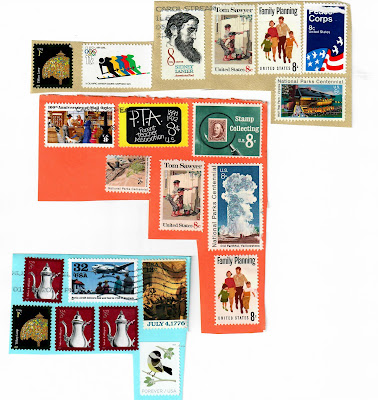 The family planning stamp caught me a bit off guard  (see top and middle right).  I think the 1972 Winter Olympics skier stamp still looks pretty cool; it's "aged" well.  (top left).  I've just learned -- because of the stamps -- that there's a Wolf Trap National Park for the Performing Arts in Virginia.   In fact, it's the only national park dedicated to the performing arts.  I didn't have a clue.

It's been rather fun to get letters plastered with these old stamps.  Seeing them has prompted me to investigate how the postal service determines what stamp "topics" to produce. Did you know you can submit an idea for consideration?  Here's the link.  There's a list of criteria to consider before submitted your idea.  Individuals can only be considered three years after their deaths and, not surprisingly, ideas have to be considered to have widespread appeal.  It takes approximately three years from ideation to production to allow time for research and approvals.

Norma Schlager said…
Some of the stamps are so interesting. When my dad passed many years ago, I found batches of stamps. He was not a collector, but everytime the postage went up, he would save the old ones. I used them up over the years and they were fun to look at and amazing to see how inexpensive postal stamps were back then.
February 8, 2019 at 3:30 PM