Let Me Introduce You To -- Boris Aronson

Today is the first entry in a new series on my blog:  Let Me Introduce You To...

The plan: to introduce you, dear readers, to fascinating people or organizations I encounter in my reading and research.

When: twice a month I'll create a post that's titled, "Let Me Introduce You To -- X" with X = name of interesting person or group.    If I'm really excited about something or someone, it's very possible I'll write more frequently. Please note that the posts will not be exhaustively researched.  They're meant to be introductions, not tomes.

Why: there are just so many people who've done interesting things and I'd love to start a dialogue.  These folks are new to me, but you might be an expert.  If you know the person, share details! Expand our collective knowledge!   I don't think anyone will be too controversial, but that remains to be seen.  If there are different opinions about what someone's done or is doing, this is the place for respectful debate.  I welcome and invite different points of view, but there will be no name calling, flaming, or other such kindergarten playground behavior. I will be monitoring comments and will not publish anything that is derogatory or disrespectful.  But I will publish opposing opinions, even to my own.  This is all about expanding our minds.  I am a firm believer in trying to be intellectually fearless.

With the ground rules set, let me introduce you to BORIS ARONSON.

Boris Aronson immigrated to New York in 1923 after having studied art in his native Russia.  He began his theatre career with the Yiddish Art Theater.  Constantly experimenting with set design and pioneering set movement, he eventually made the leap to larger stages including ballet (in later years he created the sets for Baryshnikov's "Nutcracker") and Broadway.  His avant-garde set for the 1940 ballet "The Great American Goof" was so innovative that the Museum of Modern Art presented an exhibition of his designs in 1947.  You can read the press release for the exhibition here.

Aronson received six Tony Awards for scenic design including Cabaret (1967), Zorba (1969) and Follies (1972) and had an additional 13 nominations.


Other notable productions included The Diary of Anne Frank, Orpheus Descending, and Fiddler on the Roof.  Aronson's original set design sketch for Anatevka is below, inspired by Marc Chagall's 1920 Moscow mural designs. 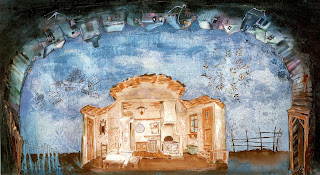 Aronson sets weren't intended to be true-to-life but instead, were created to delve into the deeper realities of the play or musical.  He stated,  I strongly believe that for each play first and foremost I must create a space which, inherent in its design, already holds the mystique of the entire event.

Aronson's work revolutionized set design and he worked extensively, creating set and costume designs for nearly 100 plays, ballets, and musical comedies in the course of his career.  He died in 1980.

Labels: Boris Aronson Let Me Introduce You To set design