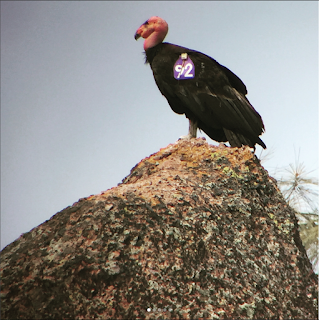 It's an endangered California condor.  We hiked in Pinnacles National Park, along the Hike Peak Trail to Condor Gulch, for the chance to see it.

The craggy landscape seems to spring out of nowhere. The park only gets about 150,000 visitors per year, mostly in the spring and winter.  The temperature can reach 112°in the summer and fall.  That's definitely something to consider before you visit, especially since there's limited shade and no water along the trails.

The day we hiked the temperature was about 85°.  That was warm enough, thank you very much.  In the park literature, the hike we took is labelled as "strenuous".  I'm not in that great of shape but with several rest and water stops along the way, I made it.  We finished the 6.5 miles in about 3.5 hours, including condor viewing and water and rest stops, climbing 97 floors according to our iPhones.

We hiked to the ridge-line saddle you can see in the picture below, where the large form the left side of the picture comes down. The final destination: the stand-alone rock "tower" you can see on the right.  That's where the condors sometimes gather and fly on the updrafts. 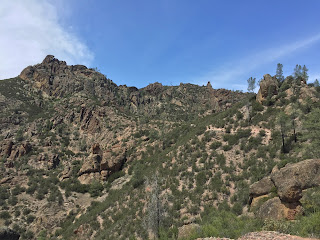 There were some sections of the trail where I was thankful the engineers had come before me, cutting stairs out of the rock and adding metal railings.  These all appeared by  narrow and steep inclines with nice drop-offs to the side. 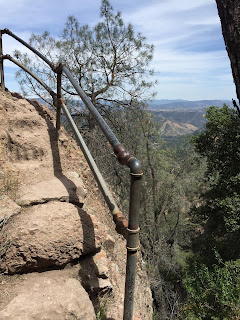 I stopped often to catch my breath and enjoy the views. 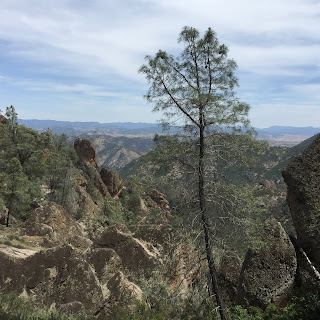 All that's left to do is hike to the back side of that large outcropping.  It was a bit of a tease.  We seemed so close, but alas, we had to go down slightly before we could climb up. 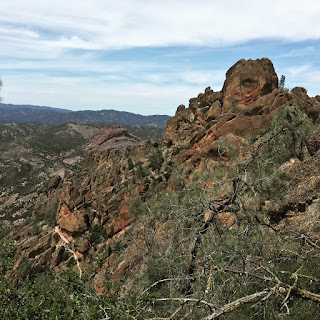 Seeing the condors wheeling and soaring was amazing.  They have a 9 1/2 foot wingspan.  It's hard to imagine and appreciate that size because they're flying in the open expanse.  Still, we were lucky.  A few soared close enough to get a good sense of scale.  Did you know they weigh 20 pounds?

We also watched large ravens play.  They flew up high and then tucked their wings in, doing barrel-rolls as they swooped downwards.  I'd never seen such behavior before.  Eventually we had to head back down, taking the trail you can see in the picture below.  Not much cover, is there? 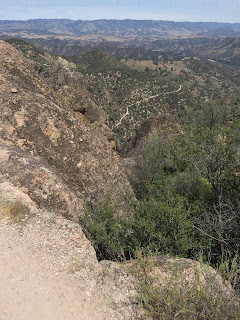 Hopefully we can head back to explore other trails in the park, such as the trails through   the caves to see roosting bats.  I recommend this park to anyone interested in some rugged scenery and some good exercise.  A few endangered condors certainly adds to the appeal.

Norma Schlager said…
Fascinating and such great pictures! Kudos to you for making that strenuous hike. I know that I could never do it.
June 5, 2018 at 8:48 AM